This handsome 17th century harbourside house is where the great explorer, James Cook, came to serve his apprenticeship in Whitby in the year 1746. It belonged to Cook's master, the Quaker ship owner, Captain John Walker. When the young Cook was not at sea, he lodged here in the attic with Walker's 'other family' of apprentices. The house is now a museum and houses a superb collection of original exhibits about Yorkshire's most famous son.

Flamingo Land is a fun day out for all the family with rides to suit all ages, from thrills to spills and family friendly rides. There is also a zoo that focuses on carefully creating the most natural environments for all guests. Flamingo Land is currently home to well over 120 species of bird, mammal, amphibian, reptile and fish. Located just a 25-minute drive from The White House and Whitby, which means that we are the perfect family hotel for a short break at Flamingo Land Theme Park and Zoo.

The North York Moors National Park is the smallest of Yorkshire's three National Parks, but is home to the largest expanse of unbroken wild heather moorland in England and a heritage coast upon which dinosaurs once roamed. Lush green fields, atmospheric woods, vast open moorland, dramatic coastline;the North York Moors has contrasting scenery and is the perfect place to get away from it all. Also, if you sit quietly enough you are sure to see a variety of birds and animals, which inhabit the landscape. Pilgrims found peace and settled on the Moors;hence you will find a wealth of important ruined abbeys, historic churches and priories across the area. To help the pilgrims to find their way, the landscape is dotted with crosses, perhaps the most recognisable feature of the Moors today. Traditions and heritage are important to the people who live on the Moors;arts and crafts, folk music and local recipes can all be found in the villages that scatter this landscape. But in this National Park you will also find an eye to the future, with the land being managed in a responsible way and the local businesses trying to reduce their environmental impacts on this unique landscape. A visit to the North York Moors National Park is well worth your time, and helping us care for our landscape will make it remain unspoilt for future generations

A great day out in North Yorkshire. Step back in time with Britain's most popular heritage steam railway. Enjoy stunning scenery along 18 miles of railway through the National Park between Whitby and Pickering.

Daily running from the end of March to the end of October. Also Pullman dining services operate at evenings and weekends throughout the year.

The old village of Robin Hood's Bay is a magnet for visitors. The village road runs steeply down to the very edge of the rocky shore and there are intriguing alleyways weaving between tightly packed cottages and houses. Along the rocky shoreline are rock pools with abundant marine life, perfect for crabbing with the kids when the tides out. The village also has public toilets, a picnic area, tourist Information, takeaways restaurants, tearooms, a general store and gift shops, and public houses serving bar meals, a church and post office. There are also regular bus services to and from Whitby and Scarborough.

The inspiration for Dracula

High on a cliff above the Yorkshire seaside town of Whitby is the gaunt, imposing remains of Whitby Abbey. Founded in 657 by St Hilda, Whitby Abbey has over the years been a bustling settlement, a kings? burial place, the setting for a historic meeting between Celtic and Roman clerics, the home of saints including the poet Caedmon, and inspiration for Bram Stoker, author of Dracula. Discover how over 2,000 years of history make the Abbey one of England?s most important archaeological sites. And at the interactive visitor centre your family can view archaeological finds spectacular audio-visual displays. An exciting new addition to Whitby Abbey will be unveiled at the start of the 2009 season. A replica of the famous Borghese gladiator statue, the original of which is in the Paris Louvre, will be installed in the Abbey's 17th Century courtyard to replace the lost statue that previously stood guard on the site. The life-size bronze replica will be the final touch to the revamping of Whitby Abbey's visitor experience centre, which includes a new visitor entrance point close to the 199 steps.

The historic fishing port of Whitby is now a popular holiday resort attracting visitors from all corners of the world. Situated along one of Britain's finest stretches of coastline, with cliffs, fine sandy bays and attractive villages, Whitby has been a port for more than 1,000 years and is still a seafarer's town today. It is unspoilt, bursting with character and quite unique and it has changed little since the days when the famous Captain James Cook lived and worked here. The traditional maritime town with its old cobbled streets, picturesque houses and sandy blue flag beach, is dominated by the cliff-top ruins of the beautiful Abbey. The narrow streets and alleys climbing down to the quayside still bustle, as they have done for centuries, and as folklore and tradition are very much part of the Whitby scene, visitors soon find themselves involved. A great place for a holiday or visit, Whitby is set among fine stretches of coast with spectacular cliffs, beaches and bays.

Whitby has much to see and do, with a selection of diverse attractions including the Captain Cook Memorial Museum, Victorian Jet Works, the Dracula Experience, Pannett Park and Whitby Museum. All providing visitors to the town with a fantastic look into the towns rich heritage, along with the Whitby Wizard, a hands on science centre for both adults and children alike. Whitby is also well known for its connections with Bram Stokers Dracular, as being one of the locations in this world famous novel. The dramatic ruins of the Whitby Abbey dominate the Eastern Headland and the 199 steps lead up to the parish Church of St Mary, whose churchyard inspired Bram Stoker to write his world-famous novel 'Dracula'.

As well as attracting famous visitors, Whitby has produced its own famous son - Captain James Cook, whose house you can visit, now the Captain Cook Memorial Museum in Whitby's old fishing quarter. The bustling harbour is still a working port and cobles can be hired for a spot of angling or enjoy the views of the coastline from one of the many pleasure crafts moored in the bay.

For food connoisseurs Whitby has it all, it's superb fish restaurants can delight your senses on the local ?catch of the day' and traditional smoking houses that produce delicious smoked kippers are a treat for any food lover. Traditional sea-shanty inns preparing locally cooked produce and tea rooms serving freshly baked pastries and Yorkshire teas.

If you enjoy music and performing arts then the Whitby Folk Festival and Regatta, held in August, are a must and in October a week-long Captain Cook Festival celebrates the town's proud seafaring traditions.

The beaches have been awarded the ENCAMS Seaside Award and will be flying the distinctive blue and yellow flag. Beach Chalets are available for weekly hire in Whitby. 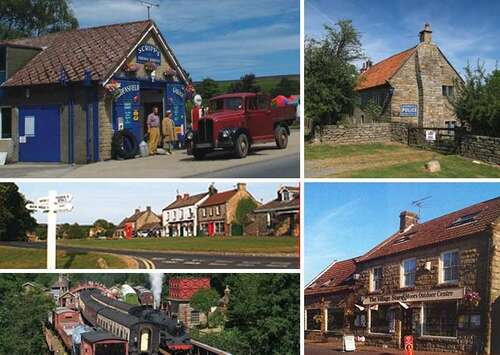 EXPLORE AIDENSFIELD AND THE HEARTBEAT FILM LOCATIONS FEATURED ON TELEVISION

We are very fortunate that television's Heartbeat Country is located right on our doorstep so you can easily explore Aidensfield and the Heartbeat film locations featured on TV.

Whitby is also on the edge of Heartbeat Country made famous by the popular television drama series based on the life and times of a country policeman that was centred upon the rural village of Goathland, known on TV as Aidensfield. This is only a short drive away, passing through typical stone-built Yorkshire villages, beautiful green countryside and the famous purple heather moorlands on route.

Heartbeat Country extends over quite an area, but its main location is Aidensield (Goathland) which possesses many of the settings and scenes featured on your television screens. These include the Police House, the Nurse's Flat, Aidensfield Stores, Aidensfield Post Office, the Aidensfield Arms, Scripps or Aidensfield Garage and Aidensfield Station. This station also featured in the famous Harry Potter movies.